For those of us around in the Eighties, Ethiopia evokes memories of one of the biggest humanitarian relief efforts the world has ever seen. In 1984 Michael Buerk, a BBC correspondent, brought shocking scenes of the Ethiopian famine to our television screens. It was this report that spurred Bob Geldof, a past pupil of Blackrock College, to raise famine-relief funds through Band Aid, followed by the Live Aid concert in Wembley. 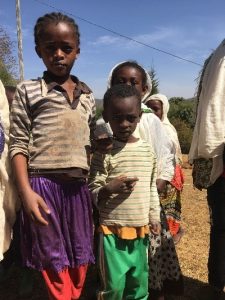 Now, more than 30 years later, Ethiopians continue to be supported by different organisations including the Spiritans. The Willow Wheelers have also funded projects in Ethiopia and wish to continue doing so. With this in mind, 40 members of the Willow Wheelers including 12 students travelled to Ethiopia in February 2018 on the annual Mission Trip. This was not the Wheelers first trip to Ethiopia, yet, the group were delighted to have Fr Martin Kelly CSSp accompany them, as his experience and knowledge of Ethiopia was invaluable throughout the trip. 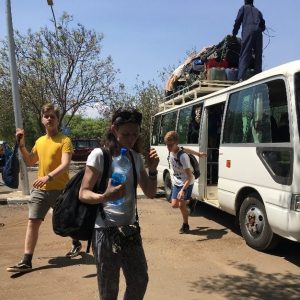 Arriving at Addis Ababa, we waited for a connecting flight to Arba Minch, our base for the first part of the trip. While we waited, we had to go through the rigmarole of locating our luggage, putting it through customs, retrieving it and repeating the cycle again. However ‘all’s well that ends well’, and once our luggage was sorted we headed for our destination, tired yet eager to start the project visits. The itinerary began with visits to a number of projects in the Arba Minch region followed by a long bus journey south to the Barona region. Whilst there we would visits schools, clinics and mission houses in Dhadim, Dhoqolle and Yabello. The plan also included a visit to Sr. Celestine’s feeding programme in Addis Ababa. With such a busy schedule there wasn’t a moment to waste and we were soon on our way. 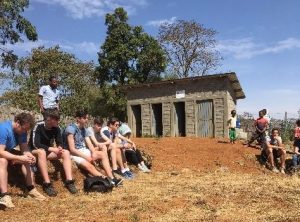 Our first visit took us to Doskai, where the Spiritans support community-based projects through their outreach programme SCORE. 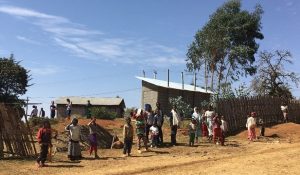 These include water, health, education and agricultural programmes. Mammo, the community project manager, stressed the importance of promoting self-sufficiency within the Doskai community to improve and sustain a better standard of living. As we walked around the village we saw plenty of evidence that the community are active participants in all projects. In Doskai we also experienced our first of many Ethiopian welcome ceremonies. Traditional dancers performed and invited us to join in, some of us took the plunge and gave a unique version of Irish dancing. Somehow I don’t think our style of dancing will catch on!

Later that afternoon we visited Chencha Prison, which houses 631 prisoners including 43 women. Rehabilitation is the main objective of the prison and this is achieved through the many educational projects on offer for prisoners. On the day we visited we saw weaving, carpentry, and mechanical workshops. Over the years the prison has received support from the church, and their support extends to other prisons such as Arba Minch Prison.
Here, Fr. Kilenpe CSSp ministers to the prisoners, his predecessor Fr. Paddy Moran CSSp devoted much time and effort in developing programmes to offer prisoners choices to improve their lives. 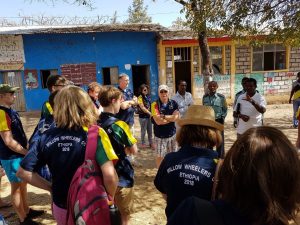 Like Chencha Prison, Arba Minch runs many educational programmes. The Prison Commander, encourages prisoners to use their time to learn skills in the hope of making a better life for themselves. This was heartening to hear as poverty and illiteracy are responsible for many of the crimes committed by the prisoners. Over in the women section we saw small projects such as cotton weaving, though the compound seemed small and squalid for the 100 women and their children housed there. Many of the mothers keep their children with them through necessity rather than choice. The absence of toys and playthings was particularly noticeable, but most distressing was the state of the children as it is very difficult to control the spread of infection and lice in such cramped conditions. Women and children are locked up at 5.30 in a sweltering room, we stood in that room and could only imagine how difficult it must be for them. Given the circumstances, the prison staff do their best. Though, to improve the living conditions, the Willow Wheelers offered to pay for a delousing programme, and kindergarten facilities for the children.

One objective of the Willow Wheelers mission trip, is to visit projects with a view of supporting them, by means of monies generated by the 100 mile cycle held on the May bank holiday. The group also bring additional emergency funds of $10,000 for immediate aid. Possible beneficiaries of these funds are discussed by the whole group on the final night before departure, but the opinions of the Blackrock students play a major role in deciding how funds will be spent. Christy emphasises that student input is central to the club’s ethos, as he acknowledged that “the club belong to them”. Following a discussion, it was decided to allocate funds to; a street feeding programme, Doqolle water project, Dhadim Clinic, basic facilities for Arba Minch prison, plus school stationary for three schools. Funding for bigger projects is decided at a later date on our return. 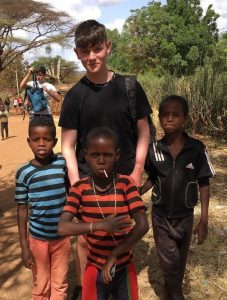 Although, funding projects is an important part of the Willow Wheeler mission trip there are other important aspects too, mainly developing an awareness of what it means to live in a third world country. Coming face to face with the realities of poverty brings about a deep understanding of the challenges faced by those living in third world conditions. For example, at the mission in Dhadim, South Ethiopia, we met and spoke to people who have little or no choice of improving their lives. The students, within our group, also noticed that their Ethiopian counterparts had only one set of clothing, and little chance of replacing worn and torn items. 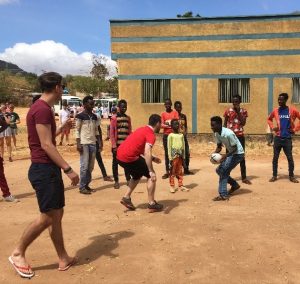 Yet, both groups of students mingled easily, played soccer and rugby whilst admiring each other’s skills. All these experiences are shared with the three schools on the Blackrock campus and contribute to the Spiritan ethos promoted by the Blackrock community. Last year Sean Hannon and Conal Regan (Fifth Year Students) made a film of their experiences and shared it with all students, it had an enormous impact within the school and generated greater interest in development education. The students also noticed that the Ethiopian children had similar interests as them and seemed happy despite their impoverished surroundings. Food for thought some might say. 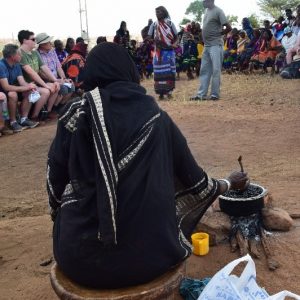 One of the unexpected treats on this trip was the Ethiopian coffee ceremonies. At each project we were invited to participate in the ceremony, performed to welcome honoured guests. It was fascinating watching the elder women stir and pour a mixture of coffee and water from one container to another over a small fire. 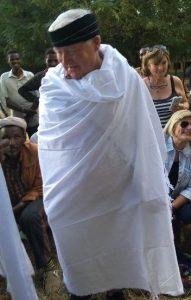 This went on for some time before the chief elder said a blessing and invited us to wipe our hands with the coffee mixture. Next cups of coffee were handed around, it tasted good though it took a bit of practice to eat the coffee beans as well. This was only one of many ceremonies we attended, the Ethiopians took great pride in welcoming us, and Christy was honoured with ceremonial robes. He looked dashing, something akin to a Roman emperor heading for the baths.

Reflecting on the Trip

This trip was particularly busy involving lots of travel, as it is, I have only scratched the surface of all we saw and did during the ten days. Some experiences stand out more than other, one in particular was the three day I spent in Dhadim mission where I met Fr Ken CSSp and Fr. Michael CSSp. Here, I saw the challenges faced by both priests as they tend to the needs of the poorest of the poor. Women walk for miles every day to collect water and firewood, food is scarce and the people are vulnerable to all kinds of diseases. Yet, Fr Ken and Fr Mike respect and care for all members of the community and do everything in their power to bring hope to the poor. Each morning we attended Mass in the mission’s small chapel, Ash Wednesday was celebrated in the mission’s main church. Having seen the work they do, it was humbling when both priest praised and blessed us for coming to visit them. After Mass we were treated to breakfast cooked and prepared by Sr. Kaki and her team. There is something special in sharing food with good people, and something even better of being in the presence of people who devote their lives to caring for those who are marginalised.

This was truly a great trip, some of the Ethiopian landscape is breath-taking that words can’t do it justice. Similarly, there aren’t words to describe the feat achieved by Christy in planning and organising the mission trip each year. It’s no exaggeration to say that thousands of people benefit from the work he started. But as Fr. Ken said, in the little chapel in Dhadim, “those who reach out to the poor, though they haven’t met, are truly blessed”