In February 2017, a group of thirty nine people including fifteen students travelled to Kenya on the annual Willow Wheeler Mission Trip.

A change of destination

Planning a mission trip is no easy task and this year’s Mission Trip to Kenya was no exception, Christy had originally planned a trip to Ethiopia but when a State of Emergency was declared he was forced to choose an alternative destination, Kenya. Some of us thought it would be impossible to organize another trip at such short notice, but not Christy.  Starting from scratch he rearranged flights and accommodation, contacted people working in various missions and prepared a new itinerary, a huge undertaking by any standards.

Kenya is a popular destination for the Willow Wheelers, many of the seasoned travellers have been to Kenya before and welcomed the opportunity to revisit projects funded by the club. One of our many Spiritan friends in Kenya, Fr John Wambu C.S.Sp., was waiting for us at the airport with the Machokos School bus, our transport for the next ten days. The ‘newbies’, those who haven’t been on a mission trip before, adapted quickly to the fast pace of a Wheeler Mission Trip.  At the hotel there was only time to unload the bags, place them in the rooms, and have a quick shower, rush back to the bus and head for Gatoto School in the Mukuru Kwa Reuben slum area.

Poverty is a reality in Kibera and can be seen at every corner, yet it was here that Madame Betty founded Gatoto Primary School to give children a better future.  Since its foundation in 1994 the school has gone from strength to strength. Betty, now the school’s manager, proudly listed their many achievements.  She is particularly proud of school’s choir which has reached the national finals, listening to them we certainly thought they were winners. 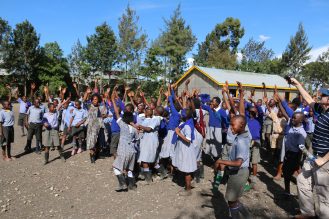 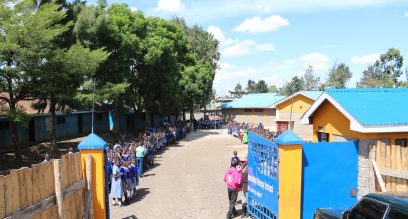 Another project we revisited in Nairobi showed similar signs of optimism and hope.  Anna Chebet runs an orphanage for abandoned children without any government help, she relies entirely on the support of kind benefactors, the Willow Wheelers included.  Over the years Anna has fed and educated hundreds of children, some of whom have gone on to third level education, others have returned to help her run the orphanage.  The Wheelers first heard of Anna through Fr. Paddy Roe C.S.Sp, a supporter of Anna’s work for many years. Both the orphanage and Gatoto School received additional funding from the Willow Wheelers. 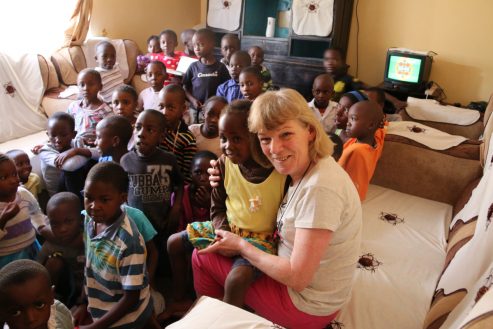 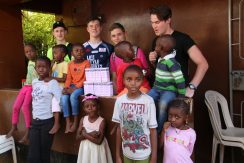 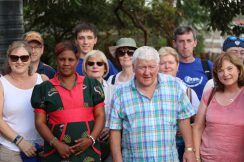 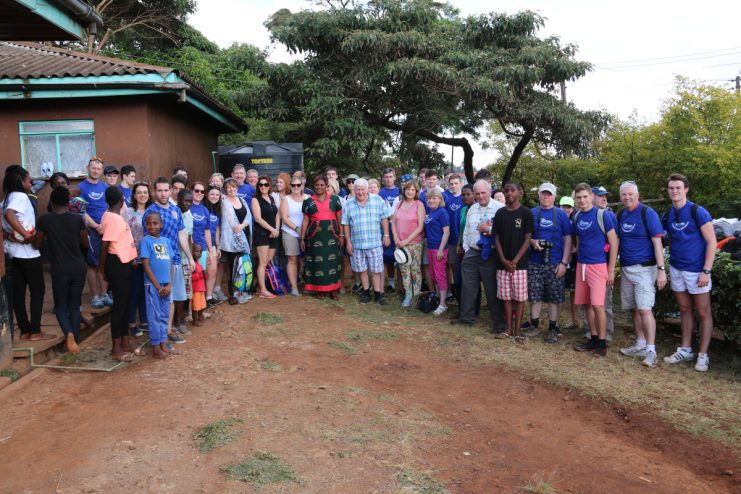 On Sunday morning we were invited to attend Mass in St Mary’s Parish Church, Makuru, the celebrant joked that it would be a short Mass for the visitors, only five hours!  Sitting in the front rows of the church we watched the altar boys and girls dance throughout the service. It was fascinating watching their movements particularly as some of them wore ill-fitting and mismatched shoes, yet their sense of joy was palpable.  Another parishioner danced and hopped about all through Mass in thanksgiving for the restoration of his health.

Alan Rogan, principal of Willow Park First Year, spoke, he said we were humbled by the welcome we had received, and sharing the Eucharist with the people of Makuru reminded him that we all share the One Spirit.  He added that it was good to unite with other Spiritan communities. 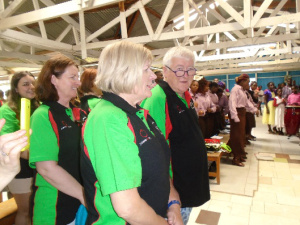 After Mass Fr. Vincent Makokha C.S.Sp brought us on a journey through Makuru slum on our way to St. Jude’s Parish.  Some of the scenes I saw from the bus that morning were the worst I have experienced in my four trips to Africa.  Although I have visited slums before, it was the scale of desperation and depravation in Makuru that struck me. There seemed to be no end in sight, one street worse than the next. Dilapidated corrugated homes stand inches away from open sewers. These sewers are full of rotting matter including animal and human faeces, small children crossed the sewers on planks of wood.  But most distressing were the faces of the children, they seemed almost lifeless as if a light had gone out.   Every day the problem get worse Fr. Vincent told us, as more and more displaced rural people migrate to the slum, it’s like jumping out of the frying pan into the fire.

Fr. Vincent tries his best to help the community, he runs a primary school and works with local administrators, The Catholic Women’s Association.  To keep the school open Fr. Vincent said they desperately need access to clean water, the Willow Wheelers promised to consider his request but in the meantime a donation was given to buy food for the children’s lunches.  Medicines donated by friends of the Wheelers were also given to the administration team.

Travelling to different areas in Kenya

Early next morning, very early 6.00 am, we boarded the bus and travelled north.  From the bus we saw the Rift Valley, vast acres of fertile lands, cyclists carrying bundles of charcoal, children walking to school, zebras, baboons, mud houses and the red soil of Kenya.  At almost midday we crossed the equator. 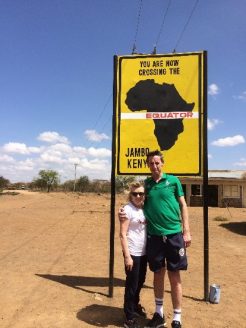 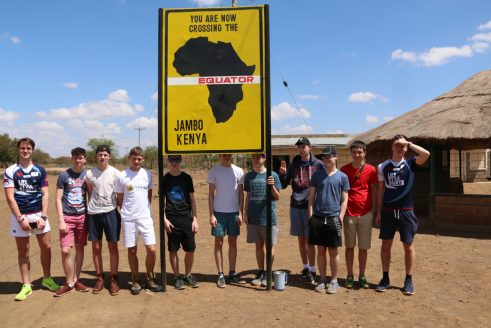 My group travelled to Barpello, East Pokot.  A welcoming party of dancing ladies greeted us on arrival.  Irene – first female chief working on behalf of the government – spoke of the difficulties facing the people of Pokot.  Drought is a serious problems and the situation is getting worse.  People are growing weaker, tribal disputes arise as people are desperate for food.  She emphasised the importance of keeping the communities in their local area rather than forcing them to migrate to the city slums where life is almost unbearable.

Barpello on the brink of a famine

One mud huts serve as classroom, there are no desks, no flooring, and no school equipment apart from a makeshift blackboard.  All other lessons are taught outside.

In a separate hut, food is prepared for the children’s lunches, a type of brown porridge. At present the school has no food, the government maize supplies have dried up, and the children are fed by rota, every third day if they are lucky.  Sickness is a big problem in the community as the children have little or no immunity from diseases in particular cholera.

The principal of the school faces a daily uphill battle but the greatest challenge is the availability of clean water.  Most of the available water is given to animals as this is the main source of income for the tribe.

On the day we visited government officials, teachers, students and Fr. Conway addressed the crowd, Christy also spoke as did I. 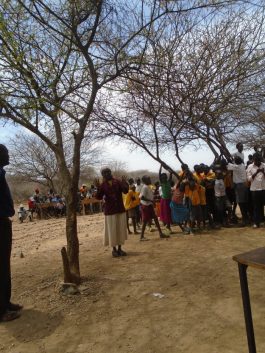 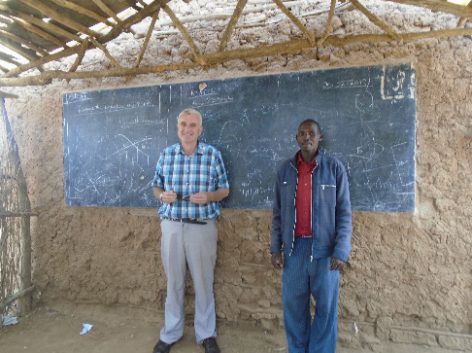 An Answer to Prayers

When the speeches, singing and dancing were over an old woman approached the Willow Wheelers.  Through an interpreter she spoke of her distress at seeing the children grow weaker every day.  Drought is something she has experienced before but she has never seen anything as bad as the current situation.  With raised hands she thanked us for reaching out to her family, The Wheelers are an answer to her prayers she said.

Before we left the tribe presented the Wheelers with a goat, Christy was also given an Atalla bag, a symbol of champions.  Those who receive the bag are expected to return with provisions for the tribe, in this case they hope Christy will bring water.

Later that day we visited Barpello High School which caters for the tribes of East Pokot.  The Willow Wheelers pay for the salaries of four teachers.

Past pupils of the school have gone on to university and some have returned to teach in the school.  The principal, Naduma, has introduced many innovative schemes such as the green house project, vegetables are grown to provide food for the students.

Students from different tribes attend the school, it allows them to mingle and understand each other.  This is very important as there are many tribal disputes in the area.

Machokos –A Beacon of Hope

Four years ago the Willow Wheelers visited Machokos School in its opening week.  Back then we were amazed by the school’s facilities and full of admiration for those who were involved with the establishment of the school. Today the school continues to thrive, extra classrooms are being built and there is a sense of pride among the school community.   The students, as students should be, are full of life and optimistic about their futures. More importantly, the school act as a beacon of hope for the children living in the nearby slums, every year the school offers scholarships, giving children a chance to escape a life of poverty.  Looking at the young happy students performing on stage, I wondered if any of them had come from Makuru slum which I had seen earlier in the week.

At the end of the Mission Trip the Wheeler have a meeting to decide how the emergency money – a  sum of €10,000 – should  be spent on  projects we have visited, whilst bigger projects such as water bore holes will be considered back in Ireland. Christy invited every member of the group to contribute to the discussion, he particularly welcomed the views of the students as he told them that ‘the club belongs to them’.  This meeting is a vital part of the mission trip as it provides an opportunity to reflect on everything we had seen and affirms the importance of visiting the projects.  I’m always amazed at how much the students absorb on the trips, in fact it is uplifting to listen to their sincere and attentive perceptions. Following the discussion it was decided to donate €2,000 to each of the rural projects, Rotu, Pokot, Tangulbei, and Marigat.  The rest of the money was divided between Gatoto School, Anna Chebet’s Orphanage and St. Jude’s Parish Makuru. 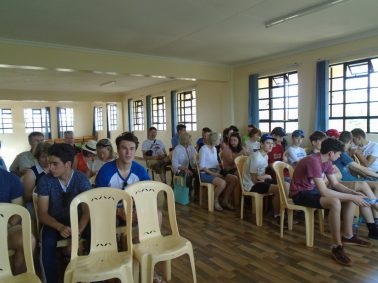 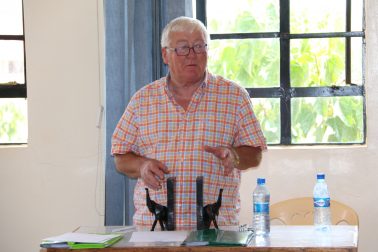 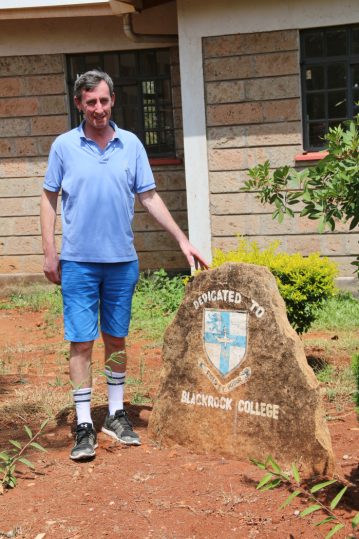 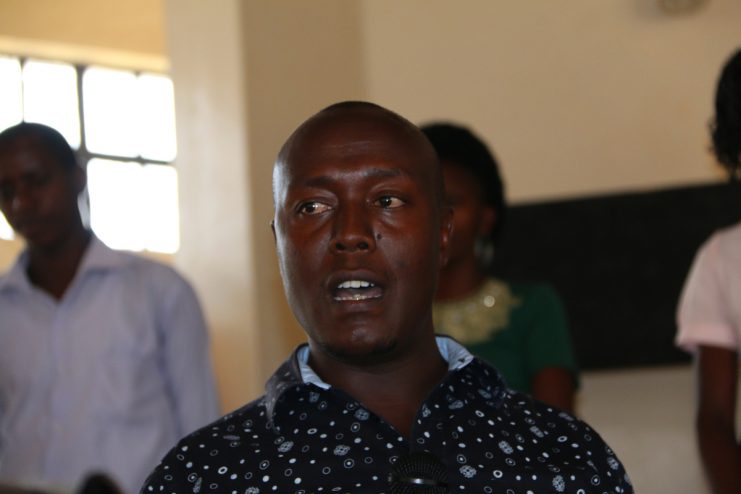 Back home when people inquire about the trip my immediate response is to say that it was a wonderful trip.  This might seem strange given the distressing scenes I had witnessed in Makuru and Barpello. Yet the trip was full of wonder such as; the African sky at night, the scenery and wildlife, crossing the equator and the generosity of people living in some of the poorest places of the world.  More than that I was struck by the courage and faith of people who have reached out to help their fellow man and I include the Spiritans in this.  Today their influence can be recognised in Kenya’s education and health systems.  We met doctors, teachers and engineers who were educated by the Spiritans, they in turn are now working to improve the lives of the poor. 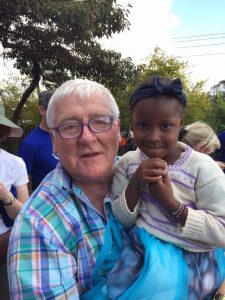 Finally there’s Christy, without him it would be almost impossible to organise the trip.  In the words of Oliver Goldsmith:

“And still they gaz’d and still the wonder grew,
That one small head could carry all he knew.”