In February 2014, I had the privilege of accompanying the Willow Wheelers on their mission trip to Kenya.  Since its beginning 25 years ago, the Willow Wheelers have raised considerable amounts of money to fund projects in some of the poorest parts of the world.  These include, educational and feeding programmes in Brazil, Ethiopia, Ghana, The Gambia, South Africa, Vietnam and Kenya.  Christy Mc Daid founder of Willow Wheelers places a great importance on visiting the projects to show support and establish contact with those working on the ground.  The visits also provide an opportunity to witness the progress of existing projects and to consider funding other in other areas. Our first visit was to Gatoto Primary School in a shanty town on the outskirts of Nairobi.  There we were greeted by hundreds of smiling children delighted by our visit. To mark the occasion the children presented us with crowns and entertained us with singing and dancing.  The inspirational principal of the school Betty Nyagoho spoke about her own traumatic childhood, as a six year she was violently attacked and then ostracized by her own community as a result.  Education was her only route out of isolation, and she was determined not to let other children suffer as she had. Betty had the option of working in more affluent areas but she chose to work in Gatoto “to give the children the hope of a better future”.  On leaving the school we walked through the shanty town where most of the children live.  Nothing could have prepared us for shocking living conditions endured by the people in Gatoto.   Open sewers run past the makeshift shacks that they call home.  The words of Betty Nyagoho rang loudly in our ears as we said goodbye the community of Gatoto.

The following day we headed off on a 10 hour journey to the Pokot region in North West Kenya.   After a six hour bus journey the group split up and travelled to different locations in 4×4 Jeeps.  One group headed for East Pokot and the others headed for the remote village of Rotu.  Travelling over dusty and bumpy roads requires a strong constitution and excellent agility skills.  Those who travelled on the open backs of the jeeps were soon covered by the red dust of Kenya although some of the experienced travellers had the presence of mind to bring face masks. On arrival in Pokot, shaken and dishevelled, we were welcomed by Chief Irene a local government officer and Fr. David Conway C.S.Sp. who has worked in Pokot for more than ten years. They told us that the villagers had prepared all day for our arrival. Local women wearing traditional Pokot necklaces sang and performed a welcoming dance.  There was laughing, singing, clapping and a sense of celebration, for us it was a joyful experience.  Later, in conversation with Irene, I was shocked to learn that these same welcoming people live in dire poverty. Some don’t know where their next meal is coming from, one mother we met had no food at all for her children.  With the help of the Willow Wheelers Irene organised bags of maize to be sent to the family. The harsh landscape, drought and lack of education contribute to the cycle of poverty experienced by the people.  Irene said that without the help of good people like Fr David and The Willow Wheelers most villagers would face a bleak future.

Meanwhile in Rotu Bishop Liam mc Daid officially opened and blessed the new prayer house which was built with funds generously donated by the Bishop.  Rotu is in a very remote area, the local people have little or no access to basic services and there is widespread illiteracy. Fr. Sean Mc Govern C.S.Sp who runs the mission in Rotu believes that it is crucial to educate the young if they are to break the cycle of poverty.   To this end he has started a school but it will take years to establish it, yet Fr. Seán continues with his efforts in very difficult conditions.

Despite the poverty there are signs of hope.  One such is Barpello Secondary School which was built to give the children from Pokot and surrounding areas a high quality education.  Willow Wheelers pay the salaries of four teachers and they also paid the college fees of the present principal Naduma.  The spirit of optimism and commitment within the school is palpable. The students we met were bright, intelligent teenagers who expressed a love of learning, some walk long distances every day to attend the school.   We also met graduates of the school who are now in third level colleges some training to be doctors, teachers and engineers. The principal recognises the potential in his students and is dismayed when he has to turn away new students due to lack of funds but he lives in hope.

After three days in Pokot we returned to Nairobi stopping at a Holy Ghost school the Claude-Academy in Nginyang.  It struck me on entering the school how similar children are the world over.  Little ones holding hands, legs swinging, nudging and reminding each other to be good in front of the visitors.   There were no differences between their actions and that of the small children in Willow Park.  At the school assembly the children expressed a love of soccer and were delighted with the footballs we had brought with us.  Although there were bemused when Christy advised them to shout “Christy!” when they score a goal.  I wonder will the trend catch on….? In the future don’t be surprised when you hear Kenyan World Cup players celebrate their gaols with cheers of “Christy!” 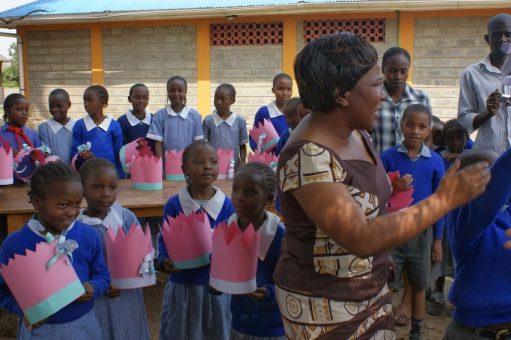 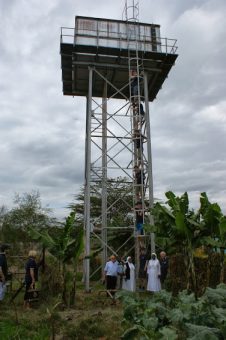 On this mission trip we also visited other projects and witnessed the changes Willow Wheelers have made to so many lives.  Access to water is a major concern for some communities in Kenya, the Wheelers have funded pumping systems and water towers in some of the poorest communities such as the one in Riruta School run by The Sisters of the Precious Blood.   With their new water tower the sisters have built two huge fish tanks and a vegetable garden.  Walking around the garden you couldn’t help but wonder at the innovative way the nuns have used the water to feed local slum children.  Fish from the tanks and the vegetables from the garden provide a healthy and balanced meal for hundreds of children every day.

During the ten days we were kept busy visiting one project after another, some of the stories we heard were heart-breaking and distressing. You would expect to come away with a sense of gloom, but the opposite was true for us.  To meet people like Anna Chibett who had lost her entire family yet found the courage to to set up an orphanage for abandoned children is both humbling and inspiring. There was no self-pity but a determination to survive and to relish all that is good.  As a group we were moved by the welcome we received everywhere, our presence alone was a cause for celebration and they delighted in sharing what little they had with us. We saw many examples of genuine generosity.  Out in the bush one day we gave small packets of sweets to the children, unfortunately there wasn’t enough for everyone.  I watched one small girl hide a packet under her T-shirt.  A few minutes later some children came over to her, she took out the sweets and shared them keeping only one for herself.  This is a scene I will never forget.

To end the trip we went to Kilaguni Safari Lodge to experience some of the African Wildlife.  On our way there we stopped at the Sultan Mahud School Machakos which was built with the help of Blackrock College.   Fr. Wambu C.S.Sp the principal, showed us around the impressive school and we were astounded by the range and quality of facilities on offer to the students. It is a remarkable achievement for all those who contributed to the building of the school.   Before we left Machakos the group planted a tree beside the water tower provided by the Willow Wheelers.

In the Safari Park we had time to relax and recover from the constant travelling. Sitting on the veranda in the evening watching the various animals coming to the watering hole is an amazing sight to behold.  To see elephants, zebras, giraffes and water buffalos in their natural environment evokes a sense of awe and wonder. You could sit there all evening listening to the cacophony of animal sounds and let the world go by.

We spent our last night with the community of Spiritans in St Mary’s Nairobi where we were wined and dined in style.  There was so much to talk about and we wanted to know more about their work in Africa.  It must have been very difficult for them as young priests leaving family and friends to work in remote and difficult areas. Back in Willow I have had time to reflect on the trip, the things that come to mind are the smiling faces of the children, the banter on the bus, beetles dropping into our dinner, being on snake alert, African dances, row upon row of shanty towns, the bartering in Nairobi markets, the red soil of Kenya, but most of all, the goodness in people and its ripple effect.  The Willow Wheelers are doing tremendous work in Kenya and I was truly honoured to witness the hope they have brought to many lives.